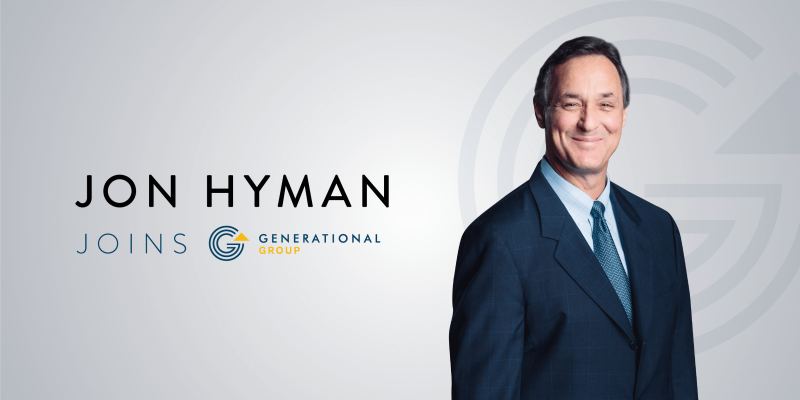 Generational Group, a leading mergers and acquisitions advisor for privately held businesses, is pleased to announce that Jon Hyman has joined the firm as Executive Managing Director.

Mr. Hyman is a highly experienced leader and senior level executive with more than 25 years of business experience across a broad spectrum of industries. He possesses a wealth of expertise in areas such as mergers and acquisitions, business start-ups and development, new product commercialization, manufacturing, and business strategy for long-term sustainable success.

In his role with Generational, Hyman will be responsible for developing strategies to build new revenue streams adjacent to Generational’s traditional model, focusing on clients in the upper middle market. In addition, he will manage and build out the new Generational Professional Alliance Program.

Terry Johnson, Chief Revenue and Strategy Officer with Generational Group, said, “We are thrilled to have Jon joining our executive leadership team. Jon has a wealth of experience, is an accomplished leader, and we are blessed to have him as part of the team. I know he will be a great asset to the organization.”

Johnson further commented, “Jon will play a key role as we expand into new markets, and we look forward to the expertise that he will bring to our firm.”

Prior to joining Generational, Hyman served as the President of Greenfields Americas, a Division of Tencate USA. Hyman also co-founded Sport Holdings, Inc., a company composed of three independent operating companies focused on manufacturing and product sales in both consumer and business channels. He later orchestrated the sale of SHI to Bessemer Holdings.

Mr. Hyman began his career in the United States Army as a Commissioned Officer, serving for more than 20 years. His last active duty assignment was in the Pentagon working on General Colin Powell’s Joint Staff. Jon is a combat veteran earning the Bronze Star Medal for service in Desert Storm.

Jon graduated from the United States Military Academy at West Point, and earned his Masters of Business Administration from Columbia Southern University.

Generational Equity, DealForce, and Generational Capital Markets, member FINRA/SIPC, are part of the Generational Group, which is headquartered in Dallas and is one of the leading M&A advisory firms in North America.

With over 250 professionals located throughout North America, the companies help business owners release the wealth of their business by providing merger, acquisition and strategic growth advisory services.

The M&A Advisor named the company the 2016 and 2017 Investment Banking Firm of the Year. For more, visit the https://www.genequityco.com/ or the Generational Equity press room.