Insights > What to Expect from Mergers and Acquisitions in 2017

What to Expect from Mergers and Acquisitions in 2017 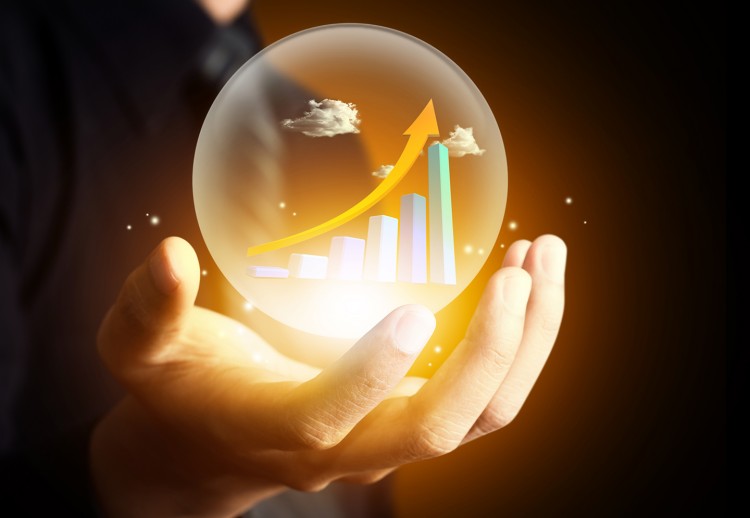 A few days ago, we started a series of articles that focused on trends in M&A activity in late 2016 and their continued impact on deal making this year. The articles are based on a survey conducted by The M&A Advisor, a leading mergers and acquisitions trade organization, along with CPA firm Katz, Sapper & Miller. They contacted a group of experienced M&A professionals, including executives, consultants, advisors, lenders, attorneys, investment bankers, and other service providers and asked them for their input on a number of M&A topics, especially on how the Trump era will impact deal making in 2017.

The fantastic news for business owners contemplating some form of exit in 2017 is that the survey results showed an expectation of a seller’s market strengthening in 2017. As we have said before, the one issue all buyers have in common is the desire to mitigate risk. Their ROI (return on investment) models are driven by the level of risk they associate not only with the specific investment they are considering, but also with the impact of the “unknown” on the economy in general.

As you know, 2016 was filled with unknowns. Here are some of the bigger ones that slowed deals down last year:

As you can see, and probably recall from your own business planning strategies last year, quite a few major decisions (including M&A) were either delayed until after the election results were in or were put on hold until the 2016 holidays were over. Clearly, from what you see on this list, many of these unknowns are no longer in that state.

And, for dealmakers, the fact that Trump won the White House and promises to roll back regulations, reduce taxes, and invest in an infrastructure program are all seen as positives for buyers and sellers. Then if you factor in a new Congress that is receptive to the same, with a Republican majority in both houses, the general sense of foreboding that impacted deals in 2016 has been lifted.

So it is not surprising that, as the study puts it, a lot of positive M&A activity is expected in 2017:

Survey respondents were then asked to look ahead to 2017 and to identify which trends they were encountering most frequently in middle-market M&A. Over half chose “increasing business valuation, reflecting higher EBITDA multiples,” and just over 40 percent cited “increasing volume of industry consolidations.”

You can see the full results of this question in this chart: 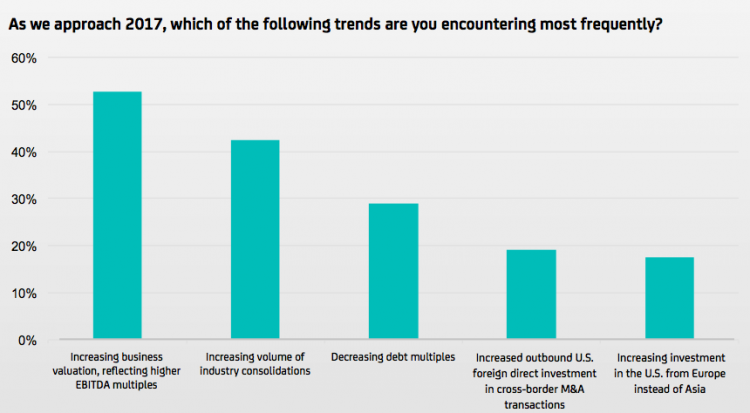 I can guarantee you that the same survey, if conducted in late 2015 regarding trends in 2016, would have looked completely different due to the impact of all the unknowns facing the country at that time. With these settled, trends are very positive.

One major caveat on valuations and future multiples: they vary from deal to deal, often significantly. Why? This gets back to risk associated with individual transactions. Obviously, the risk associated with an acquisition involving a target with $500 million in revenue is far less than one with $5 million, and hence, most likely the former will have a higher valuation. So, keep that in mind as you hear discussions of multiples and valuations in 2017. The one attached to your business will be different than others simply because your company is unique and may have strengths (positive impact) and/or weaknesses (negative impact) on your value.

But overall, the fact that M&A pros expect valuations to improve this year speaks volumes to the level of confidence that they have in the future and 2017 specifically.

This is how Amy Margolis, Principal of Origination for The Riverside Company, and one of the roundtable participants in the analysis of the survey sees 2017 activity:

“Strategics have been knocking on the door more and more. I think the luxury that we have in the middle market is that these companies, whether they are public or large private companies, are sitting on a lot of cash.”

Cash ultimately is what will be driving M&A activity (and valuations as well) in 2017: there is too much cash chasing too few good deals. The law of supply and demand will be in full force.

The question to you as a business owner is simply this: what kind of owner are you? Are you planning ahead to take advantage of the next 12-18 months of positive trends or are you the one who doesn’t plan and will eventually be forced to sell when external forces cause you to? What is the difference between these two scenarios? Potentially millions.

Don’t be part of the group that will leave chips on the table and exit at the wrong time. Learn how to plan for an optimal exit by reaching out to us and talking to one of our Senior Business Advisors. They have a wealth of experience in helping business owners reach their financial goals via an M&A event. To find out how we can do the same for you, here are some links to visit: